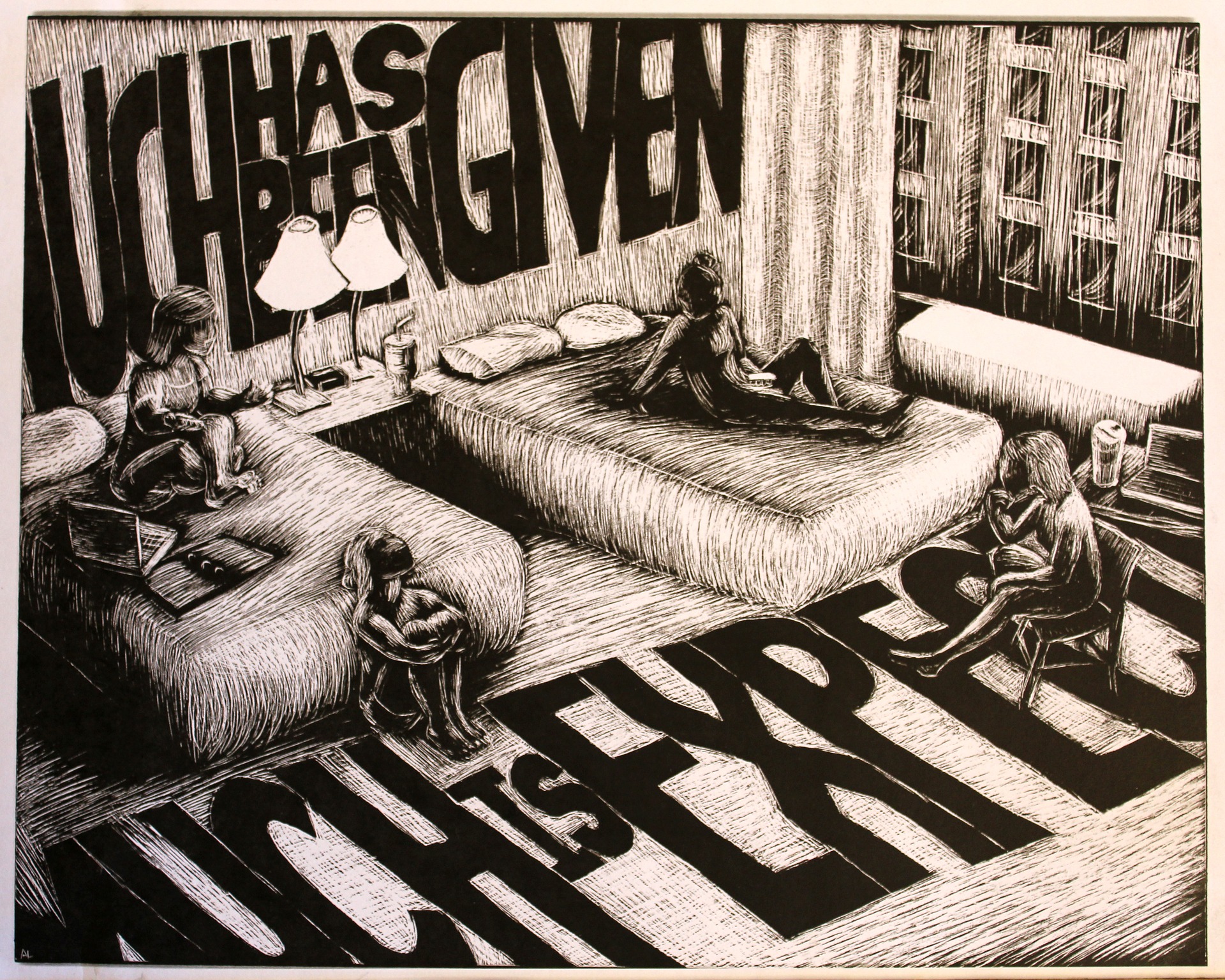 Some friends stayed with us for a week. After the requisite beer-and-whiskey emotional loosening of discussion, we fell onto career topics. Chorlad (not his real name, or a real name at all for that matter) works in customer service. The typical phone + desk = getting yelled at 9-5 that many of our brethren have fallen victim to. It pays slightly less than waiting tables, but is a more reliable income. And that’s what normal, regular adults need, right? A reliable income.

Chorlad undermines his own abilities, wonders how he can achieve more without certifications and degrees, fears lying on a resume, and is motivationally throttled by a perception of inadequacy he has undeservedly placed on himself. And for what? All we’re discussing is a better paid position with slightly more responsibility than what he currently does for a living. A 9 to 5 he’d likely still hate, that afforded him an extra dinner out per week or a payment on a more reliable vehicle. Or paying down the gargantuan hurdle of student loans that plague his financial situation, while the education they paid for does little to assist him in that plight.

Chorlad’s a talented dude. Artist, musician, writer, all-around creative person. He’s had some projects with real “potential” as our guidance counselors were wont to say. A band with several hit-caliber songs. A few articles gaining traction on websites that are gaining traction. He’s got ideas. He’s got the skills to make those ideas a reality. But still, he needs a roof over his head, and so he heads back to that 9 to 5 each morning to pay his bills each month. Like so many of us do. We are Chorlad.

On the other hand, a 9 to 5 gig is just that. The more balanced of us can leave the job at work and enjoy the other 148 hours of our week without paying too much mind to the drudgery of making ends meet. Some of us can come home and create, distract, entertain without a second thought towards that day job.

Still, others of us are caught up in wondering when it will end. Why must our contributions to society be cast in this mundane mold devoid of reward? Why can some of the most original and skilled makers and creatives of our generation be reduced to teaching their grandparents’ peers to reset a password eight hours a day for a cheque amounting to food and shelter that can be revoked at any moment?

Why are these contributions so undervalued that we are expected to provide employers with two weeks’ notice that we plan to move ahead with our lives, but they can strip away our ability to provide for ourselves on a whim? Why are our wages set so arbitrarily low by an older generation who destroyed the economy but can’t check their spam folder for a password reset e-mail without an underpaid millennial on the phone to walk them through it?

Our work ethic is chastised in the media (lazy Millenials!) while we hold two or more jobs to pay the bills and finance our passions (which many of us respectfully treat as a second or third job in and of itself). Our consumption habits are ridiculed (see: the avocado toast housing market; Millenials killing [insert business/product]). We are called entitled when we have the gall to suggest that we be able to see a doctor without facing financial ruin when we get sick.

Chorlad’s hesitance to pursue a higher career goal in a field for which he has no passion is likely a familiar story to anyone of our generation reading. He is concerned with his assumed lack of qualifications (because he’s “lazy”) while his current skills and work ethic are being under rewarded (because he’s “entitled”). The reality is that we live in a society where one can be consumed by an inferiority complex even while trying to achieve something that means little more than a paycheck to them. You’re fighting an uphill battle against yourself to work towards something you’ve been told you should desire, all the while grappling with how little any result would benefit you when what you’re passionate about simmers on a back burner.

So whose passion is resetting passwords or answering questions about a billing statement or being a verbal punching bag for someone whose internet service went out that morning? No one’s. And the people who work these jobs are so poorly compensated despite the fact that they require a very defined skill set that most people don’t have: talking down a customer without talking down /to/ them. I certainly can’t do it. That’s why I stay in the kitchen, where the customers can’t hear me talk shit.

What if we lived in a world where people who did these gritty, shitty jobs were properly compensated for them? What if our society valued the people on the other end of the phone line trying to help incompetent people solve tasks so simple they could Google the answer? What if we didn’t berate, underpay, and abuse the people who assist us with our inadequacies?

Can’t remember your password? $20+ an hour or you can stay logged out.
Too tired to make dinner? $20+ an hour or the cook hands you raw steak and potatoes, with an invoice for the food costs.
Internet go out? $20+ an hour to the person you’re yelling at, because you certainly don’t have a tech’s number or schedule at /your/ disposal and you really need to check Facebook right now, don’t you?

Further, our living expenses are egregiously out of line in comparison with prior generations’, with zero inflation in the minimum wage to compensate. So:

When do we stop paying rent to the landlords who are extorting us? When do those landlords rally against the property taxes that are being inflated by new mid and high rise urban luxury apartments that no one wants or can afford (in my recent experience: East Washington Avenue in Madison, WI; Mega Mall and the rest of Logan Square in Chicago, IL; the majority of Nashville, TN)? When do local governments stop granting tax breaks and other benefits to those developers whose properties are sitting vacant, displacing dozens-to-thousands who don’t make enough money to even consider paying $1800 for 800sqft (Madison), $3200 for 600sqft (Chicago), or $1750 for 700sqft (Nashville)?

We’re so wrapped up in this cycle of trying to survive that we can’t possibly live lives that honor our varied passions. What brilliant art are we missing out on because another painter is being berated by his table over the restaurant charging extra for ranch dressing? What anthemic songs aren’t we hearing because the cashier is too exhausted to compose after a day of being argued with over expired coupons? What novel won’t we ever read because the author was too frustrated to write after having to explain to you what an e-mail spam filter is?

And beyond the fine arts, what about the aspiring biochemist who flunks out of university because moonlighting as a bartender is killing her study time? What about the young man who would rather be volunteering within his community but has to hold down three part time jobs because rent is too expensive in his city? What about the people who bought into the four year degree and are now buried in debt over studying valuable fields like archaeology, philosophy, history, architecture–but who stock shelves or drive Uber or walk dogs to keep food on the table?

When is there time for passion? Did previous generations simply turn 30 and give up? Did their ability to purchase property and save for retirement fill the void of creative endeavors? Or was the lure of pursuing those ideals in retirement enough?

There’s a trope that was overwhelmingly prevalent in a lot of our after school specials and guidance counseling: if you don’t know what you want to do, simply go to college and you’ll figure it out there.

So why does it seem like our entire generation knows /exactly/ what we want to do, but we lack the time or financial resources to do it? I posed a question to my Facebook friends a few weeks back, asking what everyone’s hopes and dreams were. Even though my goals have been fairly solid for some time (though they have evolved and been refined as I’ve aged), I fell victim to believing this trope. I honestly thought that about half of the answers I’d receive were, “I have no idea.” I was pleasantly surprised. And terrified.

It turns out we all have dreams, but our generation has never been afforded the time to sleep on them. Nearly every person that responded had a defined and clear vision of their ideal future. None were fantastical (save for a few joking replies); all were, in fact, quite simple, and their responses all fell into three categories of goals: affect positive change in their communities, support themselves and their families without succumbing to debt, and lastly, pursue their creative passion.

Something can be extrapolated from this small sample of folks largely in the Millennial generation. Namely, that media has Millenial priorities backwards as hell.

From stepping into politics to creating animal sanctuaries to teaching the arts to children to combatting food deserts in impoverished areas, many of the responses led with a socially responsible dream. To me, this is indicative of a greater generational desire to improve our communities and share the social debt via hard work and creative problem solving. Oops, guess we are “socialists” after all.

The most popular responses by far were in regard to eliminating debt and providing for one’s family, though interestingly these tended to appear after the desire to help the community at large. Paying off student loans or parents’ mortgages, sending their children to college debt-free, buying a home for themselves, owning a car that doesn’t break down, etc. Not extreme lottery winnings here, people. My generation just wants somewhere affordable to live and a reliable way to get to work.

The last category is where the passion comes in (which can, of course, apply to the former two categories as well). Answers included financing album recording, taking bands on tour, taking a year off from the rat race to write, the budget to mount a self-written theater production, and many other wildly creative pursuits. This is obviously skewed heavily towards the fine arts because I am an artist myself and thus my social circles reflect that, but these statements could be just as true for anyone who has a passion for historical analysis, restoring classic cars, researching medical marijuana applications, or any other pursuit that involves heartfelt work.

So where do we stand? Does Chorlad apply for that next-level gig that would provide more income but potentially drain emotional energy for his creative pursuits? Do I go back to cooking burgers for assholes, defying my own moral compass, just so that I can make our car payment? Do you keep driving to that cubicle every day, letting traffic consume your time on this planet in hourlong blocks, because you have dental insurance?

And if the answer is “no,” where do we go from here?